Kaapse Afrikaans: ‘a language of freedom’

Small, 78, wrote mainly in this colloquial tongue to document in creative stories, poems and plays the life of working class coloureds during apartheid. His characters were mostly drawn from the Western Cape. 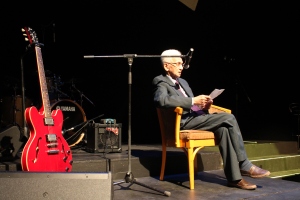 Afrikaans writer Adam Small at Artscape Theatre where a festival celebrating his work is currently running. Picture by Yazeed Kamaldien

Kaapse Afrikaans, also known as Kaaps or more recently called Afrikaaps, is regarded as a version of the more formal dictionary-based Afrikaans. It flattens vowels and drops letters, changing the sound of words.

It also mixes Afrikaans with English, in some cases using Afrikaans prefixes with English words, creating new words. An example evident in one of Small’s poems is ‘ge-appear’, which would mean ‘appeared’.

It also joins words to shorten them, for example ‘wees nie’ becomes ‘wiesie’ which would mean ‘to be’. 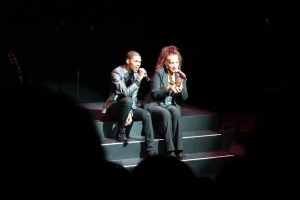 Each night, the festival presents ‘Adam. Small The Man’, which showcases actors from the non-profit Applauz Arts Initiative performing extracts of Small’s plays and poetry.

After that, singers and musicians perform ‘Adam Small BeJazzed’, which is original music compositions played to the singing of Small’s poems.

While the first part of the evening is dark and sombre, the second half lightens up somewhat.

Small’s writing is though to sit through though as it deals with the harsh realities of racism, oppression and illogical questioning in apartheid era courtrooms.

The play’s characters talk to each other about incidents where “you throw bombs” and call each other “you bloody Communists”, reflecting the realities of a past still being understood.

During an interview, Small said he had always perpetuated that “Afrikaans was never a language of whites”.

“Afrikaans has its roots in coloured life. And certainly it is not a language of enslavement. It is a language of freedom, as any other language can be in the world,” he said.

He said also that he did not “think the language is under threat” as on various occasions lamented particularly by white Afrikaners.

“As long as there are people speaking the language, it won’t be under threat. It’s only if all the people who speak this language die, then it will be under threat,” said Small.

Da Rocha said she was “born to pay tribute to the underdog” and with these productions wanted to tell Small’s stories to a younger generation “in an interesting way”.

“When you deal with history, it’s hard cold facts. When you take history in this format it appeals to young people,” she said.

He cast of actors and musicians are all young people who “knew nothing about Small,” she said.

“We have troubled youth in our country. They do not know who they are. They have no anchor. This is their history,” said Da Rocha.

“We don’t want them to lead the way things are going now. Once they know who they are, they can make better decisions.”

One of the singers, Keanu Harker, 19, from Belhar, said he only heard about Small when they did one of his poems at high school.

“He might have written the poems decades ago but it’s still relevant. I can still take a lot out of it. Racism is still alive today. We have racism in all communities,” said Harker.

“If people can take his words and apply it, think about it, it could make a difference. He talks about unity. He says we are all from the same earth.”

He added: “I don’t know much about apartheid. But we should unite against racism.”

The show’s producer Kurt Egelhof along with musical composer Camillo Lombard are set to record a CD of the songs featuring Small’s poems. Egelhof said he was also working on a documentary film about Small.

Cape Town mayor Patricia de Lille was guest speaker at the opening night this week. She said she was there to “celebrate an icon of our heritage”.

“He was an artist and activist against apartheid. His voice laid bare the injustice of apartheid and racial discrimination. He did not hesitate to use his writing to free people,” said De Lille of Small.

Small said “anything I have done, I have done it for our city and indeed for our country”.

“It is possible, just possible for me, to die happily,” he said.